Cards are the main resource of the game, each providing a unique effect and twist to the game rules. There are different kinds of cards, which can be played in different ways, and behave differently while in play. Below is a diagram of the basic card anatomy. 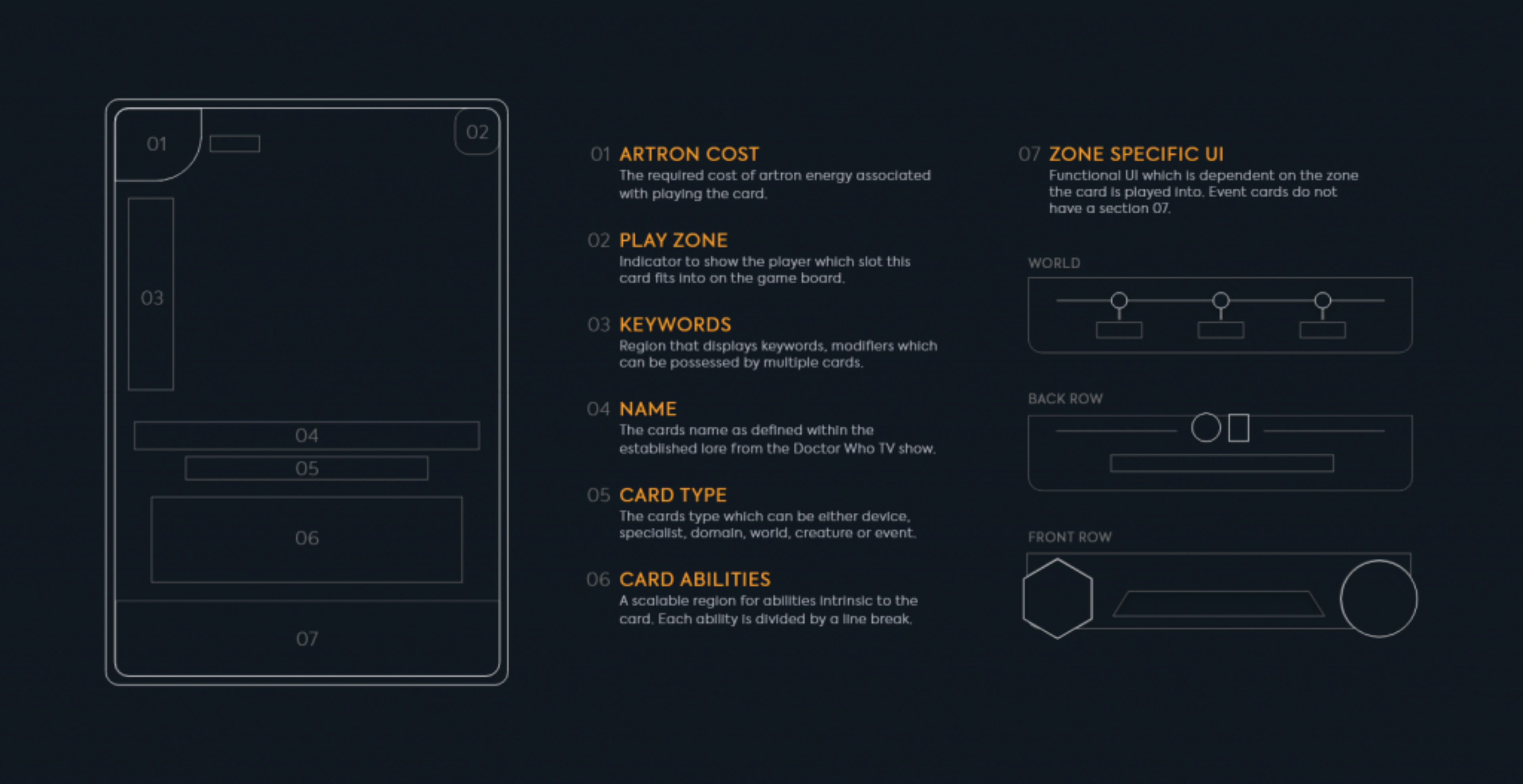 These three card types can be called Back Row Cards as they can only be played to the back row of the gamepoard. They cannot attack or block but can be targeted by card effects that specify their card type or by their lane. They can have Activated Abilities, triggered abilities, verb dependent abilities, or lane-based abilities. 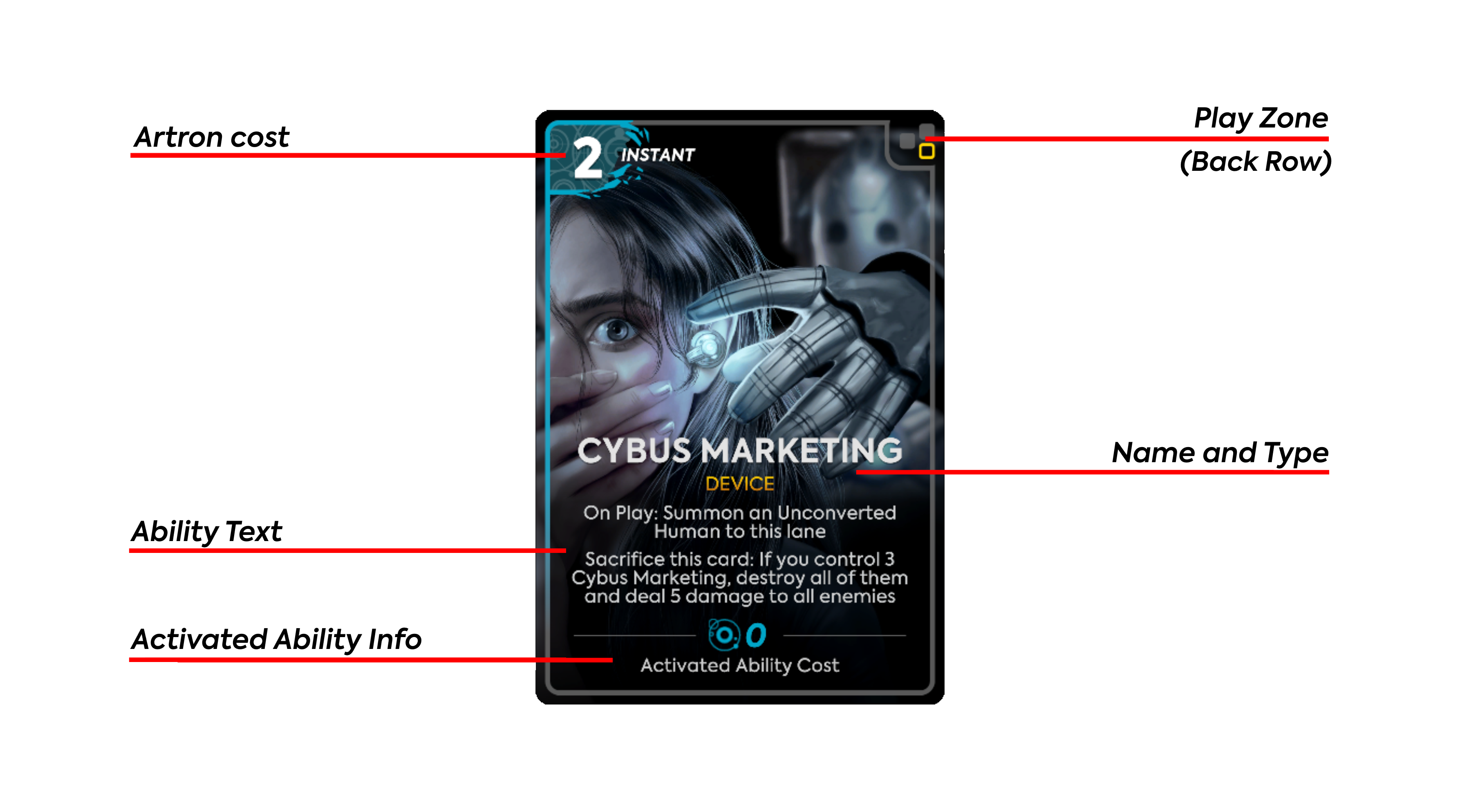 Events are single-use cards with a cost and a one-time effect. Event cards go directly to the past as they resolve. 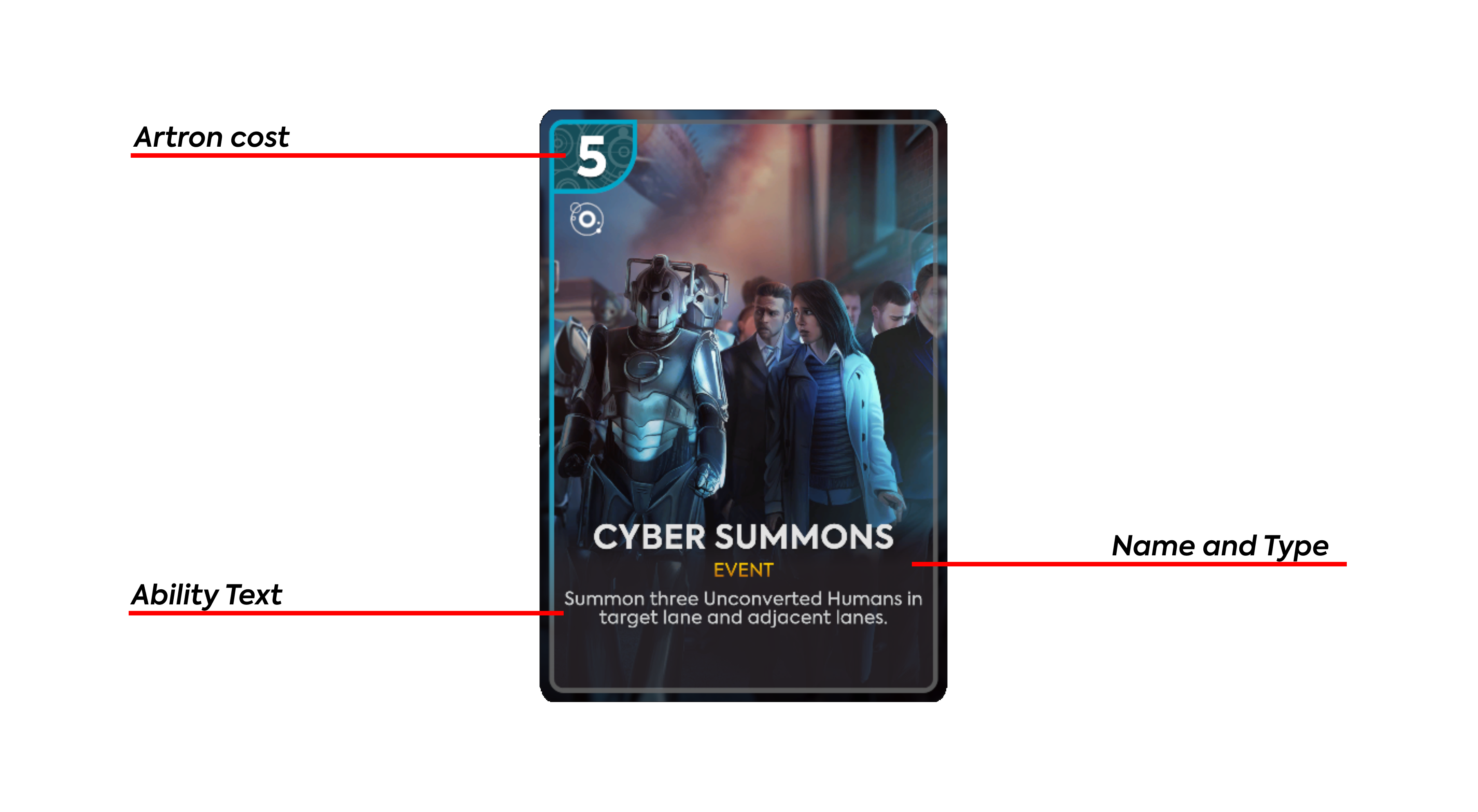 Legindary can be any type of card and be a powerful card to have in your arsenal, they are limited to a maximum of 2 copies in each deck.

Creatures are the main fighting force of your deck, they deal damage equal to its attack and takes damage to its health. When a Creature’s health reaches 0, it dies and is put into the past. 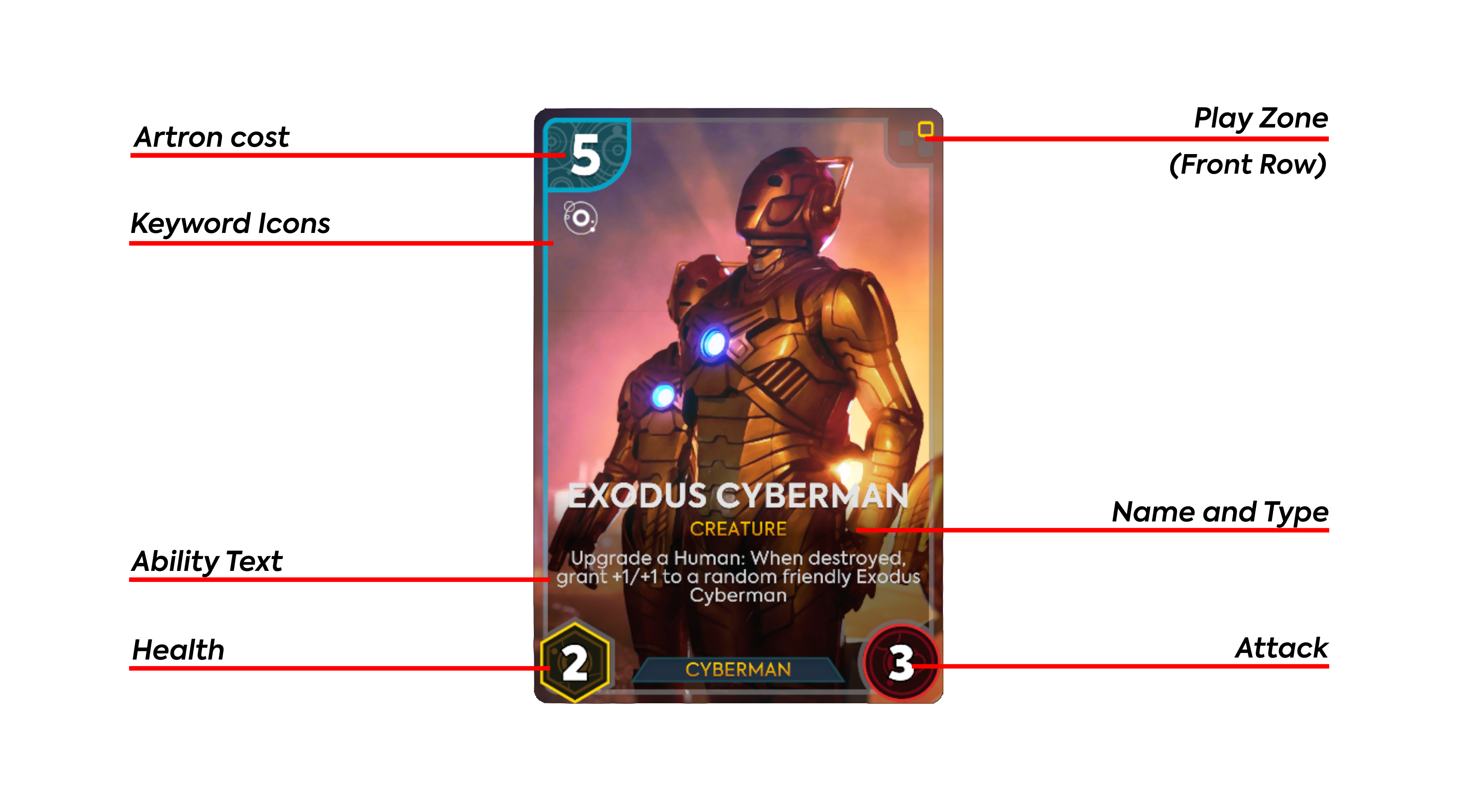 When you play a Creature, place it in an empty spot of your choice on the front row. If the front row is full, you cannot play any creatures.

Attacking with a Creature

Most creatures cannot attack the same turn as they are summoned. When attacked, the opponent can use their reaction (following turn) to block with the creature directly opposite the attacker. If that lane doesn’t contain an enemy Creature or the opponent chooses not to block, the attack will hit the enemy Shield. Attacking with a Creature disables it until your next turn.

Once a Creature has been set to attack It will be surrounded with a red square to signify it attacking state.

Blocking with a Creature

A creature can only block when being attacked by another Creature in the lane directly opposite and when its controlling player has ordered it to block the attack by clicking it during the Reaction Phase.

During the reaction phase a Creature can be placed into an empty lane where an opposing creature is attacking and be ordered to block as soon as it has been played.

Once a Creature has been set to block It will be surrounded with a blue square to signify it blocking state.

Blocking with a creature during your reaction phase disables it until the start of your next turn unless a card ability or effect interacts with it.

When a Creature fights, blocks or is blocked, both Creatures take damage to their health equal to the other Creature’s attack value.

Creatures you summon can’t use Activate Abilities until your next turn unless they have the "On Play" modifier.

You can activate an enabled creature during your Mani Phase 1 or Reaction Phase.

This card can attack the turn it's played if there is an opposing Creature. Rush cannot be used to attack an opponents shield directly as the keyword can only apply to cards on the board.

Adds armour on top of health equal to the value stated

A Creature with Guard will automatically block all incoming attacks and can also have a Triggered Ability when it's blocking.

If the dealing damage exceeds the blocker creature’s health, the excess damage goes to the player shield

Creatures with Intimidate can not be blocked by an enemy creature that has 3 attack or less.

If opponent card blocks an attack from this creature, give poisoned to that card.

If a Creature has been Poisoned at the end of the turn deal 1 damage to this creatures health.

Replace a friendly Cyberman, or all friendly humans in play with copies of this card.

Exterminate is when a Dalek deals damage to another creature equal to its attack. The Dalek is stunned after it has exterminated.

Token cards can’t be owned and are only generated via another cards abilities.

A standard deck must contain at least 1 World card. Each World comes with its own activated or triggered effects that relate to the Archetype it comes from. 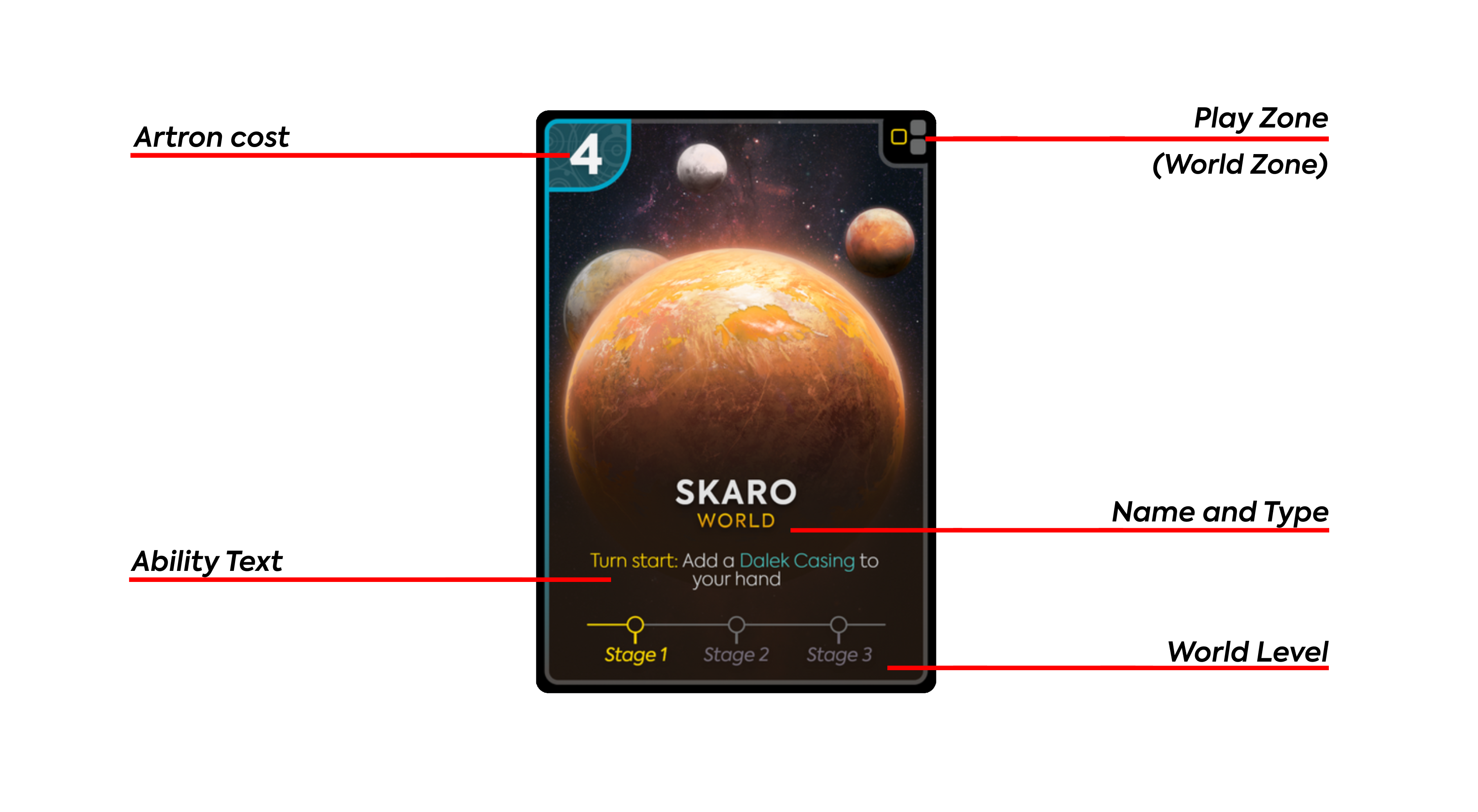 Worlds are placed on the players’ dedicated World zone. Each player can control 1 World at any time.

If a player already controls a World and plays the next level card for that world, the first world card is moved to the past and its abilities replaced by the abilities of the second world card

If a player already controls a world and plays a world from a different archetype, the original world and abilities go to the past and the newly played world takes its place.